When you are passionate about a career, it no longer becomes a job. 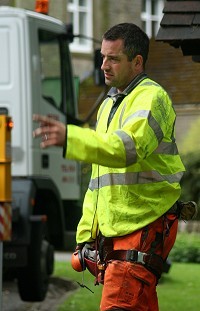 From an early age, my passion for the outdoors was always based around trees and their immediate environment. Through school, I was a classic underachiever, and my Head Master soon identified that my thoughts and strengths were elsewhere. In due course, I was assigned the duty to care for the tree nursery at my school and thrived with my interests being nurtured by a truly fascinating subject.

On leaving secondary school with no formal qualifications or career guidance I enrolled on a YTS scheme and was placed with a local company undertaking landscaping and maintenance.

Part of the scheme involved a day release course at South Manchester Community College, studying Horticulture. On gaining a basic qualification in Horticulture I then applied and accepted a full-time place at Myerscough College near Preston, studying Arboriculture.

On completion of the course, I worked for a local and reputable contractor ‘Cheshire Woodlands’ and used my basic knowledge from my studies along with the guidance of my employer, Mike Ellison, to become competent at an industry level, undertaking tree work operations.

After several years working for a national company in the Lake District and the south of England I decided to return to Myerscough for a further three years, part of which was spent teaching students in Portugal.

On completion of the course I achieved the title of best practical student and on one of the core subjects, plant identification, I averaged 98% over that three-year period. This involved not only the identification of trees and plants but also the memorising and writing of their full botanical names in Latin. Considering my school record and level of classes that I attended, it proves that you can achieve great things if you have an interest in the given subject!

Since then, I have been involved in building the company and attending climbing competitions around Europe and even New Zealand. During that time I achieved the title of European and Welsh Pole Climbing champion, both in 1998, and achieved the prestigious title of North West Tree Climbing Champion five times.

In turn, these competitions gained a great deal of publicity, which accelerated the profile of the company.

My interest in other subjects is very wide and varied, from steam engines to motorbikes, and one of my great heroes is the late Fred Dibnah.

During my time at Cheshire Woodlands, I worked next door to his world-famous back garden but unfortunately,

I never had the opportunity to meet him. Since that time I was very fortunate to make contact with his wife, Shelia and was cordially invited with my family on a tour of his empire.

Since then I have been in regular contact regarding Fred’s statue and other projects. On the tour of his garden I asked Shelia if it would be possible to loan Fred’s Horn if I won a raffle that I had entered to ‘press the button’ during the demolition of a 240 foot brick chimney in our neighbouring village, Strines, which was being razed to the ground for re-development of the old print works.

Unfortunately, we were unable to locate the horn in time for the ’Blow Down’, which I did win the honour of carrying out. This was the opportunity of a lifetime and, rightfully, I dressed for the occasion as an Edwardian Mill Owner and was accompanied by my eldest daughter Emily, who was dressed as an Edwardian Chimney Sweep.

Insurance Liability: Up to £10 Million